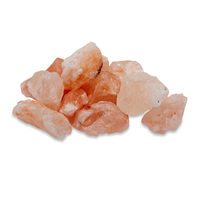 Himalayan salt is widely used by adherents of natural health practices, but what’s not as widely known is the long and storied history behind this special form of salt. Mined in the foothills of the Himalayan Mountains, these salt deposits have been known for millennia.

It is said that the salt deposits of Khewra, in the Punjab region of Pakistan, were first discovered around 326 BC. The great army headed by the famous Alexander the Great camped at this spot and saw that their horses licked the rocks. The mining commenced around this time, but records of salt mining first began to be kept around the thirteenth century AD, when the Janjua people began mining and keeping records.

Now, Himalayan salt is mostly mined from this same region. Khewra is a Punjab area in the foothills of the Himalayas. It’s around 250 kilometres away from Lahore, Pakistan and 300 kilometres away from India. This is a disputed region and has been a subject of fierce controversy between the two countries over the past few decades.

A British miner, Dr H Warth, developed a mining tunnel in 1949. This increased the depth to which the salt could be mined, and now the interior of the mines covers over 43 square miles and extends 2440 feet into the mountain. Even so, there is so much salt beneath the ground that the supply of salt in Khewra alone is estimated to last another 350 years.

Chemically similar to normal table salt, Himalayan salt is different in that it contains additional minerals like zinc and iron. Some of these crystals must be purified before being used for food purposes.

These salt crystals often have a range of colours, from nearly white to a warm pinkish colour.

For thousands of years the mining of these salts has been a source of livelihood for the citizens of this region. The preservation of food with this salt is important, as it preserves nutritional benefits for months longer than otherwise. People living in the Himalayas use this salt to preserve their food throughout the year. For thousands of years, additionally, people in the foothills have used this salt as a currency of sorts, trading it for goods at places further down the mountain, especially for items that they are unable to produce or grow at higher elevations.

The salt deposits of the Himalayas are left over from thousands of years ago when the sea covered this area. This salt has a similar composition to the brine from this ocean, a mixture of water and salt. Most of the chemical elements found in our bodies (like iron and zinc) are also found in Himalayan salt.

How Is It Used for Health?

Part of our air is made from water vapour, and the rooms of your house are filled with many particles of foreign materials that we breathe in and out every day. These particles are from dust, smoke, and other unwanted objects. Since salt is hygroscopic (attracting water) it works as a sort of sponge, soaking in moisture from the air in our houses.

People use Himalayan salt in lamp form to soak up impurities in your house’s atmosphere, working as a filter of sorts. The lamp inside the salt block works as a heat source, drying the salt as it attracts moisture, leaving the impurities trapped in the salt.

Adherents of natural health claim that in addition to these hygroscopic filtering properties, salt lamps work by releasing negative ions into the air. This is a benefit for several reasons provided by natural health experts.

Some Products for Salt Lamp Enthusiasts

If you are new to the world of salt lamps, we can start you off with the classic “natural” shaped salt lamps. These beautiful lamps look great anywhere around the home or office.

This dragon egg carved salt lamp is one of our favourite examples of a salt lamp which works well in any setting.

For those who are looking for something a little different, we recommend this caged fire bowl… it’s a metal wire bowl filled with salt chunks that look quite nice displayed in your home.

And of course, we've got a full range of many products made with Himalayan salt. Take a look and find the perfect product for yourself!